Home Bob (Bobby) Hickey
About:
Hi, may name is Bob Hickey. Owner and coach of Next Step Archery. I’ve enjoyed many sports:
Archery – 40 years all styles and disciples and still LOVE IT!
Baseball – 10 years Pitcher 3rd and Catcher 13 Ks in 6 innings at a State All Star game. Crazy knuckle ball (fingertips) fast and slow curve with a crackin fastball. Coach and Umpire.
Football – 8 years Inside LB, Nosegaurd Fullback w Darrin Barry!
Wrestling – 2 years 2 pins at State.
Fishing – every stream lake and puddle I could find in the NW! Trout Bass Stealhead Salmon.
Hunting – everything in every way and every chance I can…Archery Shotgun Rifle Rocks… you name it.
Sock Ball – Played as a Pro w Darrin…Ask him for details. 😉

I’ve hiked hunted and fished in every County in Washington and have bugled Bull Elk from here to Montana!

1982 Received my first compound bow and lessons from the Legend and family friend Mr Glenn St Charles. My mother and I were the very first two to own the Bucksin compound and these were both signed #1 and #2 originals from Glenn. These were Glenn’s first production compounds!! Started Bowhunting, Training retrievers for field trials/waterfoul hunting and continued to compete in local archery events till 16 years old.

1988-1990 Traveled to every single archery event I could as a Nock Point staff shooter with sponsors from Browning Martin and Easton. I competed in archery events across the PNW as a YA and I managed to win every event I entered in those two years (besides the carp derbies (Darrins fault we lost:) I also competed with BB Recurve, Traditional longbow and BHFS equipment.

1990 Paralyzed in a diving accident. Diagnosed as a C4 quadriplegic. Life gets REAL! 🙂

2000 Started working with DVR on PASS Plan to start driving and GET BACK TO WORK!

One of my most ambitious goals is to create and build a Archery Center of Excellence! 70m indoor range that will be large enough to host World Class events and will be a multi sport center for everyone in our community to enjoy.

Another goal is to teach valuable life skills through the Art of Archery as well as help Archery grow in the PNW.

Young Adult Freestyle Ranking/Achievements:
• #1 Pacific North America
• #2 World IFAA
• 12x NW Sectional Champion
• 28x WSAA State Champion
• First YA in WSAA history to ever clean the Multicolor and Blueface indoor rounds. Was the first YA in WSAA history to clean a NFAA Animal round and only the second YA to ever do so at a NFAA Outdoor National. Was also offered to go train at the Olympic Training center in 1989

Bringing Archery back to Seattle Parks. Archery was banned in the Parks since 1981 and in 2011 NSA held a tournament at Jackson Golf course. The City of Seattle is now recognizing Archery as a SAFE and popular activity and we will see more progress with Archery in the Parks in the near future!

Interesting facts or interest outside of archery:
• Accidentally drove my wheelchair off the side of a cliff while Elk Hunting! OUCH!
• I like playing chess, cribbage, slap jack, the slap game, knuckles, slug “Ford” and sock ball. I love to watch the 55 and older baseball games in person.
• Favorite number is 22
• Favorite colors BLACK ‘n BLUE 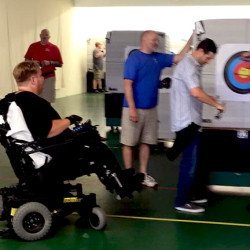 USA Archery Certification:
Level 3 Coach
Coaching Bow Styles
• Recurve • Compound • Barebow
SafeSport Certified:
SafeSport is a required course for all Next Step Archery staff and volunteers who have routine access to minors. Additionally it is required by USA Archery for all Level 2 and higher instructors and coaches. Athletes will perform better, soar higher, and get more from sport if they feel safe. SafeSport seeks to create a healthy, supportive environment for all participants. Visit www.safesport.org for more information.

Need more information or have a question? Send us an email and we'll get back to you, asap.